I was impressed by the Japanese macaque designed by Hideo Komatsu and decided to fold it.

So is it a monkey?  According to Wikipedia, the Japanese macaque, also known as the snow monkey, is an old-world monkey that is native to Japan.  It got the name “snow monkey” because it lives in places that are covered with snow for a few months each year.  It has a characteristic pinkish face and derriere.

The lunar new year falls on 28 Jan this year, when the reign of the monkey in the Chinese zodiac will end and the year of the Rooster will begin.  So this is a timely farewell to the monkey, which I blogged about at the beginning of the lunar year.  I will post another article of rooster origami in the next couple of weeks, so stay tuned. 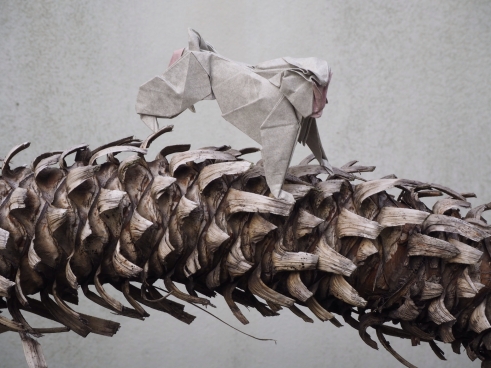 Thanks to my daughter for the lovely photographs.

Japanese macaque is from Works of Hideo Komatsu.  It is folded from a piece of 10 in. square Elephanthide sandwiched with pink tissue.  Finished length is 4 in.